The Medieval and Humanist Inspiration for UD’s Living Latin Curriculum 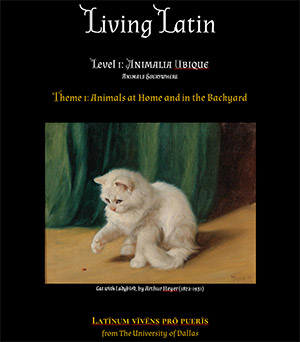 One of my main inspirations for UD’s Living Latin curriculum, for which I am currently writing Level 1 (K-4th grade), came from an appendix in a book on St. Ignatius’ Idea of a Jesuit University (1954), by Father George Ganss (1905-2000).

In this appendix entitled “Historical Sketch of the Teaching of Latin,” Fr. Ganss shows that up until the 1700s, and especially during the Middle Ages and Renaissance Humanism, Latin was taught as a living language. Early instruction was via the Direct Method and immersion in the language, and only after students “had benefited from four to six years of constant practice in speaking Latin” (p. 215) did they analyze and dissect sentences and read (and translate) difficult texts. I was particularly struck by his argument that the “Grammar Translation” method, now the prevalent method of Latin instruction, did not develop until around the 1600s, and was not a widespread method during the Middle Ages or Renaissance Humanism.

But why should we look to these time periods for guidance on teaching languages? As Claude Pavur, another Jesuit scholar, explains, “in the early modern period, many, many people learned to read and write Latin with a facility that far surpasses that which is typical of even the best students in our own times” (“Upgrading Latin Pedagogy,” p. 5). Reviving early modern humanist approaches thus seems likely to give us the best chance of bringing about the greatest linguistic mastery in the shortest amount of time. George Ganss elucidates this Humanist Method of language learning in detail.

Young students (roughly between 5 and 12) were first immersed in the language through conversation and easy-reader type books. Ganss calls these “made Latin” – that is, Latin “made” specifically for the purpose of teaching the language, as opposed to original sentences from classical authors. Students also memorized simple everyday dialogs. (Memorizing dialogs on every day topics also seems to have been the preferred method that Greek-speaking adults used to learn Latin, according to Eleanor Dickey’s Learning Latin the Ancient Way.) Students apparently even composed and sang songs like “Flevit Lepus Parvulus,” a lovely example of medieval potty humor. Thus, students acquired fluency through hearing, speaking, reading and writing the language, that is, through many years of using (not just learning about) the language. It was only after the age of 12, that is “only after they [students] thoroughly established and practiced the memory associations to the point of spontaneous recall and had benefited from four to six years of constant practice in speaking Latin” (p. 215) that focused attention was given to formal grammar and to the reading of classics such as Cicero’s Orations or Livy’s History or Horace’s Odes. And students then did not primarily translate these works – in fact, according to Ganss, students “probably had only a little more difficulty in understanding the Latin classics than boys of a similar age now have with Shakespeare, Edmund Burke, Milton, Browning” (p. 215).

These methodological differences of the Humanist model and the grammar translation method correspond to different objectives. Ganss pinpoints the contrast: “[M]odern methods of teaching Latin aim chiefly to impart knowledge about the language and its literature. In contrast, the ancient methods in the 13th and in the 16th centuries aimed chiefly to develop an art – the art of speaking, reading and writing the language” (p. 226). Thus, whereas today many Latin programs stress the usefulness of Latin for improving students English, their general cognitive agility, and their SAT scores, earlier centuries emphasized “the ability to speak read and write Latin with ease, coupled with the desire to use it to acquire and communicate ideas after its study in school would have ceased” (p. 228).

Ganss suggests that there are two indispensable steps in the process of learning a new language, steps that were integral parts of the Humanist methods: The first is establishing direct memory associations between the words of the new language and the ideas they express. In other words, students should ideally form direct associations between words, phrases or sentences in the new language and the things or ideas themselves. Associations between words in the new language and words of students’ native language are only second best (e.g. seeing a table and immediately thinking “mensa” is more direct than thinking “that’s a table and the Latin word for table is “mensa”). Secondly, Ganss stresses the importance of “frequent and steady repetition day after day which begets ready, spontaneous, automatic and unconscious facility in using the words of the new language with complete ease. […] The more frequent, pleasant and steady the repetition the more efficiently and completely will the new language be learned” (p. 211). While I’m sure all language teachers emphasize frequent and steady repetition in their classes, Ganss’ discussion of the Humanist model suggests that the kind of repetition is important. The “frequent, pleasant and steady” repetition he discusses involves mostly language at the sentence level, not, for example, isolated drills of word endings. Claude Pavur in his aforementioned article puts this more directly, emphasizing that “[i]t may even be helpful to move away from a single-word lexical approach almost completely, toward a consistently phrase-based one in which words and forms are always learned in some sort of verbal context, facilitating the students’ mental acts of direct understanding” (p. 7).

UD’s Living Latin Curriculum is an attempt to revive the Humanist method by immersing young students in the language through prayers, bible verses, songs, nursery rhymes, story telling and story books, picture study of beautiful works of art, and guided “Little Socratic conversations”, all of which provide pleasant and steady repetition of both words and grammatical structures.